At the Head of the Charles on October 23, UW (16:08.31) finished among the top ten (37 th of 40 in Madison Newspapers account) after being acquitted of a one-minute penalty (11 th without the penalty). The Badger youth four finished third and the championship fours finished fifth.

At the Head of the Rock, the varsity won by 56 seconds and the Four + won by over one minute.

At the Tail of the Fox, the Badgers won every event.

Over winter break, the crew traveled to Austin, TX and defeated the Austin Boat Club on their final day.

March 25, the Rowing Banquet is planned for the Field House.

April 20, senior and JV-8 stroke Jeff Miller was awarded the prestigious Theodore Herfurth Award for initiative and efficiency at UW. With a GPA of 3.935 in materials science engineering. Miller was one of 118 student-athletes honored. The qualifying standard was a 3.5 GPA (cumulative or in either of the last two semesters). Twenty sports ere represented and the men’s and women’s crew teams, per usual, had the most honorees. “I thought this was an outstanding event and something that was long overdue to shine the light on the real stars,” said Wisconsin men’s crew coach Randy Jablonic, who had 16 athlete’s in the spotlight.

In other Midwest Championship races, Greg Myhr won the Open singles and Wisconsin won the JV-8; the freshman eight; and the Open Four +.

May 2, the Wisconsin State Journal (Sports, p. 1B) wrote “title IX regulations are driving cuts in UW athletic rosters, hardest hit may be crew. The roster may have to be cut from 60 to 45 over two years.

May 6, the Cochrane Cup was scheduled in Hanover, NH.

On May 11, the Campus Planning Committee approved a site for the new men’s boathouse just off Willow Beach, on a wooded site across Willow Drive, west of the Schuman Shelter and NE of the Natatorium, The shells will have to be carried a couple of hundred feet to the water. The existing boathouse will be renovated for the women.

May 21, the Eastern Sprints were scheduled. Wisco’s varsity eight was 13 th.

May 26, in the Walsh Cup at Annapolis, Navy won all of the IRA-preparatory events, except for the Frosh 8 and 4-.

IRA finals, now moved permanently to Camden, NJ, were: Brown (5:31.3, fastest in the 100-year history of the regatta) wins the varsity eights for third straight year, followed by Washington (their first IRA since 1972; Washington, the Pacific-10 champion, had been unbeaten until today.), Navy, Harvard (first time since 1897), Princeton and California. With Washington and Harvard in attendance, the varsity eight race was tantamount to a national championship. UW’s varsity eight was second in the petite finals (8th overall).

Jeffrey Miller, a varsity four member and the first alternate on the varsity eight boat, was named recipient of the Theodore Herfurth Award for initiative and efficiency. Established in 1928, the Herfurth is the highest recognition of undergraduate student achievement awarded by the faculty and staff at Wisconsin. The award is based on academic achievement, degree of self-support, significant contributions through extracurricular activities, and the ability to verbally express oneself. Miller had a 3.935 GPA in material science and engineering and works at UW engineering labs. 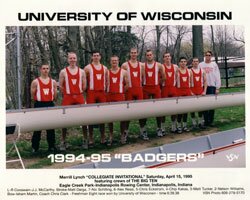