September 9, the Governor’s Cup race was scheduled on Lake Mendota.

Randy Jablonic, UW-Madison’s famed crew coach, has trained his share of big athletes. But none had four legs and weighed 1,500 pounds. Until Monday. Jablonic helped rescue a steer that broke loose from the university’s Stock Pavilion late Monday morning and ended up in Lake Mendota.

The runaway steer caused a huge, midday commotion on campus before it was captured and taken back to the Stock Pavilion. ‘I don’t know when I’ve last coached a steer in 30 feet of water,’ Jablonic said. ‘He was belligerent as hell.’

At about 11:05AM, two steers escaped from their basement quarters of the Stock Pavilion, in the western part of campus, just north of Campus Drive. One of the animals apparently got loose from its stall and pushed on the bar of a fire door. One steer was quickly corralled, but the second wondered down Campus Drive and turned left on Charter Street. University police herded the steer on to the Lakeshore Path, a bicycle and walking path along the southern shore of the lake. It rammed and dented one squad car trying to block its path, then jumped into the lake near the UW crew house.

That’s when Jablonic got to work. Asked for help by campus police, he and a friend (UW rigger Roger Payne) hopped into a small, motorized boat and set off after the steer. ‘We were afraid it was going to drown out there,’ Jablonic said of the animal, which was more than 200 yards off shore. ‘It was headed straight out…to Picnic Point.’

Eventually, Jablonic maneuvered his boat to get in front of the steer, and began slapping ors in the water to scare the animal toward shore. The tactic worked, but the steer swam another 150 yards parallel to the shore before stopping near Kronshage Hall, a campus dormitory.

Once there, campus police and workers from the Stock Pavilion rigged up a cattle herd gate and brought in a trailer from the pavilion. Once the steer saw (smelled?) the familiar trailer, he quickly jumped out of the lake and ran into it. Neither animal was injured, police said.

‘Every now and then it would turn around and look at us,’ said Jablonic. ‘I wish my crews would respond that way.’

Winter training was in Austin, Texas (Dec. 26 to Jan. 10), with the varsity rowing all but twice in four-man shells, with line-ups changed every practice.

April 20, in Seattle, Washington (5:46.3), who defeated Wisco by 14 seconds at the San Diego Crew Classic, defeated Wisco (5:51.0). Wisco was even with the Huskies until the last 300 meters. “In the last few strokes Washington just turned it on and pulled away,” UW coach Randy Jablonic said. “We ran a great race, just not good enough.”

The Eastern Sprints were May 19. In the varsity eights UW’s varsity (5:59.0) eight was 2 nd in the petite final (8 th overall), behind Navy (5:58.8) and ahead of Brown (6:03.6). The varsity final finish was: Northeastern, Penn, Princeton, Harvard, Yale and Dartmouth (times unavailable). Northeastern later had to return the trophy, as one of their oarsmen was declared ineligible for failing to make up an incomplete course.

Princeton won all three eights and the lightweights, the first four-time winner of these four events ever. Varsity eight results: Princeton (5:29.6, aided by slight tail wind), Washington (5:30.9), Penn (5:36.2), Dartmouth, Navy and Georgetown. It was only Princeton’s second varsity victory at the IRA’s (the first was in 1985).

Princeton Coach Jordan had made the painful decision of demoting his Captain, Matt Rutherford, to the second varsity. Northeastern’s varsity eight, a favorite, having won the Eastern Sprints, had to drop out due to the ineligibility of one of its oarsmen. Northeastern coach Walter “Buzz” Congram had been informed by his Registrar and immediately withdrew the fastest crew he ever had in 34 years in coaching. Because of the ineligibility, Northeastern had to forfeit its victories in all five of its prior races, including the Eastern Sprints

The UW Freshman 4+ (Kristian Knutsen (cox), Paul Tegan (stroke), Peter Dietric, Pat Woerner, Hickory Foudray (bow)) won their IRA event in a time of 6:30.3. The frosh eight was third in the petite finals. The pairs – were second and the V4 – was fourth.

After the regatta, the team voted Douglas Prochaska the “Pickle Boat Captain” Award.

Ben Profahl and Tim Storm were named to the first team of the 1996 USRowing Collegiate All-American team.

Following the 1996 season, Coach Randy Jablonic, after 29 years of coaching at UW, stepped down as head coach, though he continued to coach the varsity squad. Jabo is succeeded by Chris Clark, who continues for one more year as freshmen coach. 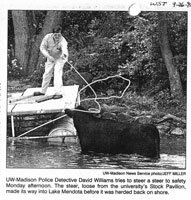 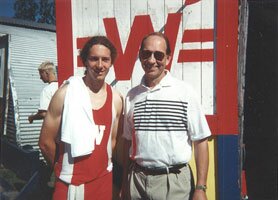 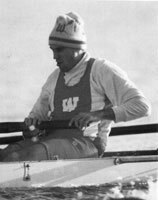