“Pain is the sign of weakness leaving your body.”

While on the Rock River for spring training, Mike Seelen caught a crab and was flipped by the oar into the icy cold waters of the Rock. Unable to reach Seelen directly because of other passing eights who’d not seen the accident, the coach’s launch was forced to pause for several seconds. Reaching Seelen after a half-minute or so, the rower was too cold to swim. Yanking him into the coach’s launch, he was soon wrapped in blankets and sweatshirts. Once on shore, crewmates then lent him several layers of warm, dry clothes. Later at the May crew banquet, Seelen - during a time of senior comments on their careers - was to later express his touching thanks to his squad.

On April 14, Wisconsin’s varsity rowed against Oregon State and Michigan. “Because of a windy course across the southern shore of Lake Mendota, the course was moved to Gov. Nelson State Park on the north side of the lake and began around 10:00AM. Temperatures were around 60 degrees with a 5 to 10 mph quartering tailwind from the starboard. In a hard fought race, Wisconsin and Oregon State were close at the 500-meter mark. At the 900, Wisco had gone up by 3 seats. At the 1,400-meter mark, Wisco made a big move to open to a length. The final margin was Wisconsin (5:59.0) open water” off the penultimate stroke over Oregon State (6:02.94), with Michigan (6:16.8) behind.

After the fourth-varsity race (UW winning at 6:22.2 ahead of Michigan (6:29.7)), one of the Wisconsin shells noticed two early drinkers who’d fallen out of their sinking canoe into the cold waters of Lake Mendota. Fishing them out, and quite certainly saving their lives, the two were dropped on shore from Coach Myhr’s launch near their home to go in and warm up. The canoe was believed lost. Midway through the freshman contest, a local police boat, responding to an apparent 911 call on the canoe’s earlier capsizing, came barreling through the course at the 800-meter mark. Coach Clark saw the wake danger and gave both crew ample warning. While passing perpendicularly across the first wave, the bow of the UW freshmen shell had to row against the second wake for the duration of the race. The disturbance was not the best beginning for the novice crew in their first race. The UW frosh (6:15.2) defeated Michigan (6:19.7) by half-a length.

On April 21, on a 2,000-meter course from University Bay to a pair of orange buoys between the concrete pier between the Union and the Wisconsin Alumni Center and the dead end of Lake Street at the shore of Lake Mendota, the 7 th ranked Badgers varsity faced off against 4 th ranked Washington Huskies. A slight cross wind fanned the course. “The teams were fairly even off the line. At the 500, and continuing through the 1,000-meter mark, Washington was up by 1 to 2 seats. At the 1000-meter mark, Washington ‘took a 20’ (a series of sprinting strokes meant, in this case, to stretch the lead) and gained another couple of seats. Wisco responded and stopped the move. Not until the point of 400-meters to go did Wisco begin to inch back (notwithstanding the modest distraction of seeing two oblivious fishermen in an outboard on the north border of the course). In the last 20 meters, it appeared each crew surged into the lead according to who was on the drive and recovery. At the line, Wisconsin (5:57.59) lost by 14 inches to Washington (5:57.50). UW’s boating: Brian Bauer (bow), Ed Golding, Pete Giese, Alan Geweke, Beau Hoopman, Brian McDonough, Dirk Peters, sophomore Peter Nagle (stroke) and John Taylor (coxswain).

In Madison on a 2,000-meter course on Lake Mendota April 28 th, the varsity competed in three intra-team pairs races and two time trials as an eight; they did not race against Minnesota in any competition. The JV, 2JV and 3JV boats raced Minnesota Boat Club’s best eight. Under the threat to the 3JV that if they didn’t beat Minnesota, they would not go to the Eastern Sprints, all three boats came in ahead of Minnesota. The JV eight and the 2JV eight had earlier been broken into four 4+ entries and raced against the Minnesota Boat Club’s lightweight and varsity fours; Minnesota beat two of the UW entries and lost to two others. In the frosh races, Wisco defeated the Minnesota’s heavyweight and lightweight entries.

On May 5, on the 2,000-meter course from a stake-boat start between the Longfellow and the MIT Bridges on the Charles River, Wisconsin, Dartmouth and MIT started their Cochrane Cup race around 10:00AM. Wisco’s varsity eight started slowly, caught and passed Dartmouth with 500-meters to go, but was rowed through to lose by four feet and O.9 seconds at the finish off the Cambridge-side shore between the MIT and Boston University boathouses. Final times: Dartmouth at 5:54.8, Wisconsin at 5:55.7 and MIT at 6:19.0. It was the Badgers first loss since 1997. In the JV-8 race, the Badgers cruised to a 1 ½ length win over Dartmouth and MIT. In the first race of the day in the Cochrane face-offs, the UW frosh eight (6:06.5) also won in the same order by 3 lengths over Dartmouth (6:19.2) and MIT (6:37.5). The course was busy this morning as several women’s races and a Harvard-Northeastern dual were also held.

Boats that recieved a medal:

Note: In the first two IRA heats, the varsity boating was Nagle (bow), Giese, Bauer, Hoopman, Golding, McDonough, Gewecke, Peters (stroke) and Taylor (cox). The lineup was changed for the semi’s and the finals.

Pete Giese (5 th in the coxed pairs) and Beau Hoopman (2 nd in the heavyweight eight) participated in the Nation’s Cup in Linz, Australia on July 27-29, 2001. John Taylor coxed the 4 + to 6 th place in Lucerne, Switzerland from August 19 to 26, 2001. Mike Teti has been the U.S. National Team and Olympic coach in recent years.

The Pickle Boat Captain was awarded to John Remington. 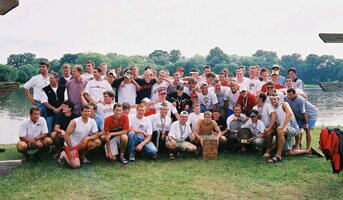 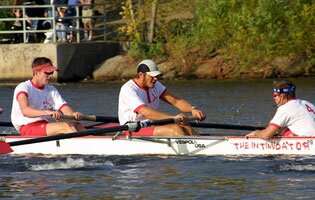