Except for the boat racing, there is but little which bears the semblance of sport for sport’s sake. In baseball and football, the evils are most conspicuous. {I dislike} the bargaining that accompanies the arrangement of playing schedules and deplore the strengthening of the athletic army by the addition of mercenaries who stand ready to give their time and skill to the college which retains him.

October 20 and 21, the Head of the Charles. UW’s varsity eight was 7 th overall (3 rd among U.S. colleges). The event was won by U.S. Rowing, the German National Team, … Harvard and Northeastern – both crews who row the Charles River every day - came in ahead of the Badgers.

On November 28, 2002, the Milwaukee Journal (p. 6C) announced the U.S. Department of Education’s Office of Civil Rights had ruled the school’s (University of Wisconsin – Madison) 23-sport athletic program (12 for women and 11 for men) complies with its 1972 Title IX law. The suit, brought against UW in 1990 by the wife of a UW professor, came to pre-occupy the Athletic Department for over ten years. Figures for 2000-01 showed that 52.44% of UW’s student athletes were women (482 of 919). To reach this percentage, UW had added women’s softball and lightweight crew in 1995-96 and women’s hockey in 1999-00. UW may still be considering adding women’s field hockey to its program. Any Division-I college with a men’s football program strains to comply with these federal regulations.

On the same day, UW President Wiley spoke at 4:00PM to the men’s crew at the boathouse to reiterate some of the basics to compliance with the NCAA’s “extra benefits” rules. Shopping at the Shoe Box was disallowed for six years, as the owner continues to offer discounts to athletes (all athletes, not just UW athletes) who request them.

Winter training was held on Town lake in Austin from December 28, 2001 through January 11, 2002 . The crew used the Sheraton Inn and enjoyed a dinner at the all-you-can-eat Salt Lick Restaurant.

April 6-7 is the San Diego Classic.

April 13 is Michigan and Oregon State in Madison , WI .

April 20, the UW varsity travels to Washington and California ( Redwood Shores ) to race against Cal and Stanford in two separate contests. In the absence of UW’s varsity and 2V8 boats, Minnesota opted not to come to Madison .

April 27 is the Midwest Rowing Championship, followed by the crew banquet that evening.

May 19, the Eastern Sprints are in Worcester , MA .

On the morning of May 23, the “Grand Row” was planned as the 5 th set of the day’s practice. The Grand Row is the crew’s annual salute to the campus and is a “row by” off the Memorial Union. Unfortunately, the men’s straight (coxless) four (Messrs. Ryan Kipp (bow), Kyle Schaible, Jason Devlin and Ross Hart (stroke), practicing for the weekend’s race against Navy in Annapolis and the following week at the IRA’s, collided with the women’s lightweight eight. Three rowers were taken to the Emergency Room with injuries including a bow ball in the back, a serious cut on the head from an oar and a rigger in the back (Kipp).

All rowers were treated and released, as the men headed for Annapolis the following afternoon and the women were readying for the lightweight championships at Camden , NJ in 10 days.

Boats that received a medal:

Senior Nicholas (“Nick” or “Kito”) Kitowski was named a Remington scholar as the male student-athlete who graduated with the highest grade-point averages in their class (3.93 obtaining a BS in kinesiology).

In spite of an invitation generated from the Badger’s Eastern Sprints win, Coach Chris Clark opted not to go to Henley this summer. Clark’s reasons included the belief that taking a mostly juniors boat would compromise their interest in next season (Dartmouth 2001), the conflict of already having committed to run the U.S’s World Under 23 selection camp in Madison beginning June 11, and the NCAA’s limitation (followed by UW even though men’s heavyweight crew is not an NCAA sanctioned sport) of going only once every four years (when Clark felt next year’s eight might perform even better than this year’s varsity boat).

On June 11, 2002 , Coach Clark opened the Under 23 World Rowing Championship (formerly the “Nation’s Cup”) U.S. Selection Camp at UW’s boathouse on Babcock Drive in Madison . Eight Badgers were invited to compete for spots in the U.S eight and coxless pairs. Three Badgers were later selected on July 11: Beau Hoopman, Peter Geise and Paul Daniels. The World Under 23 Regatta is scheduled for Genoa , Italy on July 26-28. 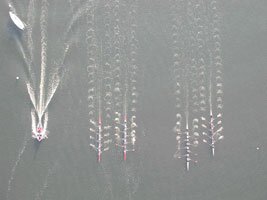 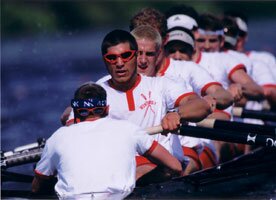 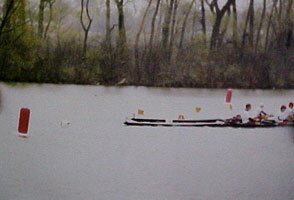 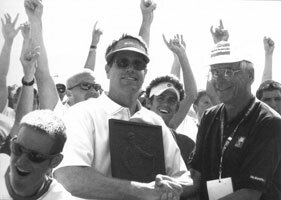 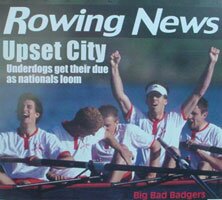 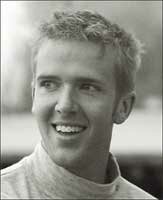